No, a breach of normality probably won't cause a 17% Type 1 error rate


Hang on... a 17% Type I error rate purely due to non-normality? This seemed implausibly high to me. In an OLS model such as a t-test (or ANOVA, or ANCOVA, or regression, or whatever), the assumption of normally distributed error terms really isn't very important. For example, it isn't required for the estimates to be unbiased or consistent or efficient. It is required for the sampling distribution of test statistics such as the t statistic to follow their intended distributions, and thus for significance tests and confidence intervals to be trustworthy... but even then, as the sample size grows larger, as per the CLT these sampling distributions will converge toward normality anyway, virtually regardless of the original error distribution. So the idea of non-normal "data" screwing up the Type 1 error rate to this degree was hard to swallow.

So I looked closer, and found a few things that bugged me about this article. Firstly, in an article attempting to give methodological advice, it really bugs me that the authors misstate the assumptions of OLS procedures. They say:

" we conducted simulations on the one-sample t-test, simple regression, one-way ANOVA, and confirmatory factor analysis (CFA).... Note that for all of these models, the interest is in the normality of the dependent variable(s)."

So let's move on to looking at the simulations of the effects of non-normality on Type I error rates for the one-sample t-test (Table 4 in the article). This is where the headline figure of a "17%" Type 1 error rate comes from, albeit that the authors seem to be mis-rounding 17.7%. Basically what the authors did here is:
There are a number of conditions they looked at, but the 17.7% figure comes about when N = 18 and skewness = 6.32 (this is the 99th percentile for skewness in the datasets they observed).

However,  they also note that "Because kurtosis has little influence on the t-test, it was kept at the 99th percentile, 95.75, throughout all conditions." I'm unsure where they get this claim from: to the extent that non-normality might cause problems with Type 1 error, both skewness and kurtosis could do so. On the face of it, this is a strange decision: It means that all the results for the one-sample t-test simulation are based on an extremely high and unusual level of kurtosis, a fact that is not emphasised in the article.

As it happens, one of the real reasons why they chose this level of kurtosis is presumably that the simulation simply just wouldn't run if they tried to combine a more moderate degree of kurtosis with a high level of skewness like 6.32. The minimum possible kurtosis for any probability distribution is skewness^2 + 1.

That technical note aside, the net effect is that the headline figure of a Type I error rate of 17% is based on a tiny sample size (18) and an extremely unusual degree of non-normality: An extremely high degree of skewness (6.32, the 99th percentile for skewness across their observed datasets), and an extremely high degree of excess kurtosis (95.75, again the 99th percentile). To give you an idea of what this distribution looks like, check the histogram below (10,000 data points drawn from this distribution). It's a little hard to imagine even a very poor researcher not noticing that their is something amiss if this was the distribution of their raw data!

In fact, it's worth noting that the authors "contacted 339 researchers with publications that appeared in Psychological Science from January 2013 to June 2014 and 164 more researchers with publications that appeared in the American Education Research Journal from January 2010 to June 2014", but we have no idea how many of these authors applied analyses that actually assumed normality. No doubt, some of the extreme levels of skewness and kurtosis arose in cases such as reaction time measurements or count data, where even without checking diagnostics the original authors might have been well aware that a normality assumption was inappropriate.

So what about more plausible degrees of non-normality? If anything, a close read of the article shows how even quite dramatic non-normality causes few problems: For example, take the case of N = 18, skewness of 2.77 and excess kurtosis of 95.75 (a small sample size with still quite extreme non-normality, as visualised in the q-q plot below - albeit not as extreme as the case discussed previously). The authors find that the Type 1 error rate (with alpha of 0.05) in this scenario is... 6.4%. That's hardly something to get too stressed out about!

Ok, so non-normality only really causes Type I problems in extremely severe situations: E.g., pathologically high levels of skewness and kurtosis combined with small sample sizes. But why am I picking on the authors? There is still at least some small danger here of inflated Type 1 error - isn't it good to be conservative and check for these problems?

Well, I have two main worries with this perspective.

Firstly, it's my perception that psychologists worry far too much about normality, and ignore the other assumptions of common OLS procedures. E.g., in descending order of importance:

Now breaches of some of these assumptions (especially the first one) are much more serious, because they can result in estimates that aren't unbiased and consistent and efficient; consequently Type I error rates can of course be substantially inflated (or deflated). As methodologists, we need to bang on about normality less, and the other assumptions more. As Andrew Gelman has said, normality is a minor concern in comparison to some of the other assumptions (note that his phrasing of the OLS/regression assumptions is a little different to how I've written them above, though the ideas are similar).

In conclusion...Non-normality can cause problems, but only in very unusual situations. If you're running a t-test or regression, chances are that there are more important things for you to be worrying about. 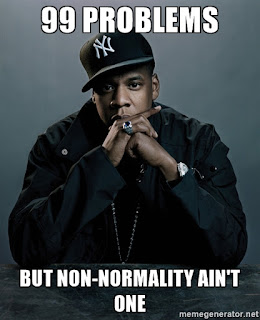